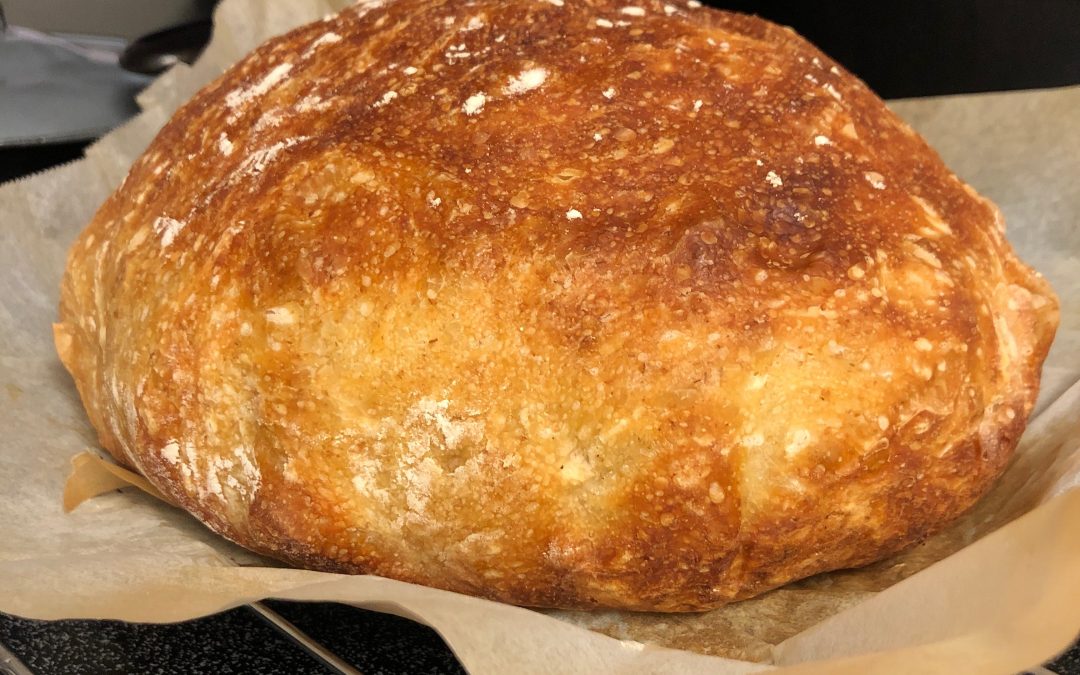 I decided to become a bread baker during the pandemic. I craved a crusty artisan loaf with a bit of “tooth,” but since the bakery shelves were bare and even sliced white bread was in short supply, I quickly realized if I wanted toast with my morning coffee or a mop for a savory sauce at night, I would have to bake it myself.

If I ever baked a loaf of bread it was at least forty years ago, so for all intents and purposes I am a complete novice. The first challenge, I discovered, was to acquire the ingredients—yeast and flour were almost as scarce as toilet paper in the first weeks of the crisis—so I started stockpiling supplies in preparation for my great baking adventure.

In short order I had rounded up two five-pound sacks of flour—all-purpose and whole wheat—but yeast was another story. The only yeast I had ever seen was in those little yellow single-use packets that look like they should hold a teabag, and they were no longer available. The only yeast I could find was online in one-pound $20 bags, which I’m told would make at least 92 loaves of bread (way more if you use this recipe)—clearly laughable for someone who has never baked (and might never bake again if the first try was a failure). So using the power of social media I found four friends to share with and placed my order. Along the way, I got a Venmo refresher and discovered Zelle.

Finally the yeast arrived and I was ready to bake. But not so fast: I realized there were too many recipes to choose from and I remembered all the times I had told myself, “I’m a cook, not a baker.” It turns out I have internalized all those baking admonitions about the need for precision (something I am short on) and the importance of following directions (ditto), so I quickly developed a case of baking jitters.

But I kept returning to this legendary Mark Bittman recipe I had discovered in my research (and all the iterations that have sprung from it), and after a while spent osmosing the directions, I felt I was ready. Bittman’s recipe, first published in the New York Times in 2006, is an unabashed crib from a loaf made famous by a New York baker named Jim Lahey. It has garnered so much attention over the years that it has been republished (and re-worked) many times. In fact, this article, published in 2014, consists of nothing but comments from ardent readers—more than 500 at last count!

I mention all this not only by way of attribution, but because I learned some valuable tips from reading through hundreds of comments, and made modifications to the original recipe as a result. My biggest takeaway is to forgo the arcane technique involving tea towels and opt for parchment paper instead, but even more than that, forget about precision–it turns out baking is as much of an art as any other kind of cooking and there is more wiggle room than I ever imagined.

¼ tsp. instant yeast (yes, this is not a typo, it really is this tiny amount)

1. In a large bowl combine flour, yeast and salt. Add water and stir to combine. Dough will be shaggy and sticky. Cover with plastic wrap and let rest for 12 to 18 hours in a warm room (at least 70 degrees). Dough is ready when its surface is dotted with bubbles.

2. Sprinkle work surface (a large cutting board works well) with a little flour to prevent sticking and scrape dough onto board. Fold dough over on itself several times (two or three, five or six, precision is not important here). Dust with flour again to prevent sticking, cover loosely with plastic wrap, and let rest on board for 15 minutes.

3. Meanwhile, place a piece of parchment paper inside a large clean bowl. Using just enough flour to keep dough from sticking to your fingers or the work surface, gently and quickly shape into a ball and transfer to parchment-lined bowl. Dust lightly with flour (again!), cover loosely with plastic wrap, and allow to rise for 2 hours. When it is ready, dough will be more than double in size and will not spring back readily when poked with a finger.

4. After an hour-and-a-half (a half hour before dough is ready to bake), preheat oven to 450 degrees and place a 6-8 quart cast iron Dutch oven (or another heavy covered pan, including enamel, Pyrex, or ceramic) in oven as it heats, removing lid first. When oven is ready, carefully remove hot pan. Using parchment paper as a sling, transfer dough to hot pan, leaving paper in pan as a liner. Cover with lid and bake 30 minutes. Remove lid and bake an additional 12 minutes, until crust is deeply browned. Cool on a rack for a few minutes, then remove from pan, peel off paper, and continue to cool on a rack.

5. Serving and storage: The crust will feel rock hard straight out of the oven but don’t be alarmed—as it cools steam from inside the loaf will temper the crust. The longer you let it rest after baking, the more the crumb will firm up and the easier it will be to slice. If not serving all at once, after it has cooled completely cut loaf in pieces, one to eat and the rest to freeze. It will stay fresh up to a week stored on the counter in a ziplock bag or covered tightly in plastic wrap. Freeze the other pieces in a Ziplock bag.