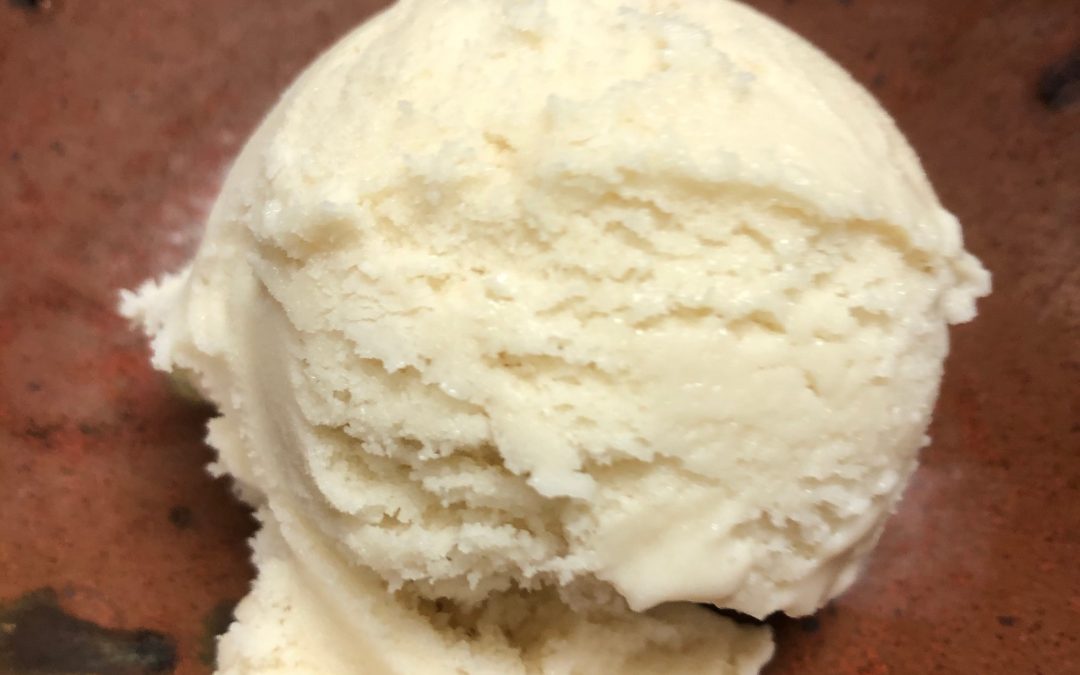 A year ago I got infected with the homemade ice cream bug (a figure of speech that has taken on a whole new meaning) and bought an inexpensive ice cream maker. That’s when I discovered just how challenging it is to make a creamy vegan ice cream that doesn’t freeze into an icy block after a day or two in the freezer. Since then I have scoured the World Wide Web in search of the one perfect recipe.

Guess what? The divine path to vegan ice cream Nirvana doesn’t exist out there on the Inter Webs. My quest revealed not one but myriad approaches, ingredients, and techniques—so confusing! In an attempt to adhere to the scientific method, I made successive batches, tweaking one element after another. During a low point, when buying ice cream on a whim was no longer possible because of a pesky worldwide pandemic, I even endured an ice cream fast. Finally, a year after my first experiment I arrived at my own, original solution that cracks the code for the three criteria I consider indispensable: flavor, texture, and simplicity.

First of all, I discovered that there is indeed a magic ingredient after all.  After a year of ignoring any post that included it because it seemed like such a non sequitur in a frozen dessert, it turns out cornstarch—yes, that cheap, ubiquitous pantry staple commonly used in baking and frying—cuts down on iciness in the finished ice cream like nothing else I’ve tried, so now I’m an enthusiastic convert. (A tablespoon of tasteless alcohol like vodka is purported to do the same thing, but I prefer to keep my recipes non-alcoholic as much as possible.)

I have also read that including at least some liquid sweetener such as agave nectar or maple syrup helps prevent ice crystals from forming. While I cannot confirm the science of that claim, I did it and it worked, so that’s another arrow in the non-icy quiver.

Finally, I concluded that canned coconut milk by itself was not the answer—its unctuous fattiness and caloric overload makes me feel like I’m eating a stick of butter. So although sufficient fat is mandatory to make believable ice cream, substituting soy milk—the highest in fat of all the shelf-stable nondairy milks—for some of the canned coconut mixture solved the mouth feel riddle.